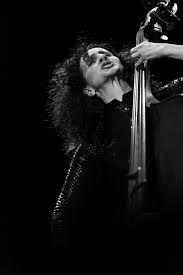 The internationally renowned double bassist, singer, performance artist and interdisciplinary collaborator, Irina-Kalina Goudeva was born in Sofia, Bulgaria. She studied double bass with professor Todor Toshev at the Sofia State Conservatory (graduated in 1990) and with Franco Petracchi at the Geneva Conservatory of Music (receiving the First Virtuoso Prize in 1993).

While pursuing her activities as a principal player in different orchestras such as Sinfonietta de Lausanne, Orchestre de chambre de Neuchâtel and the Orchestra of the Royal Danish Theatre, Miss Goudeva also found great inspiration in performing chamber music. She has collaborated with many ensembles including Ensemble 415, Swiss Consort, Kordepan in Switzerland; Ensemble Midtwest, Esbjerg Ensemble and Danish Chamber Players, all in Denmark; Musica Vitae in Växjö, Sweden and others.

Eclectic by nature, Ms Goudeva experiments with crossovers between different genres of music. Her repertoire spans over music from the Renaissance and Baroque to modern tango, jazz and electroacoustic music. She often uses her contralto voice as an integral part of her performance, adding a new musical and theatrical dimension to her art. Her passion for contemporary music has resulted in collaboration with renowned composers/conductors including P. Boulez, G. Kurtag, H. Lachenmann, H. Holliger, E. Pomarico, P. A. Valade, as well as ensembles such as Contrechamps in Switzerland, Athelas Sinfonietta in Denmark, Ars Nova in Sweden and Ensemble Modern in Germany.